Monitoring  Water Quality in the Gulf of Mexico After Hurricane Harvey

As 13 trillion gallons of floodwater flowed into the Gulf of Mexico after Hurricane Harvey, researchers from Texas A&M’s Geochemical and Environmental Research Group (GERG) realized that this freshwater plume was potentially headed towards the Flower Garden Banks National Marine Sanctuary.

They needed an efficient way to monitor water quality and understand the impacts to the ecosystem. And they needed to move quickly.

In this case study, you’ll learn how the Wave Glider: 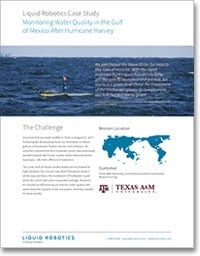